I obviously need to iron it but my green screen arrived in the mail. They folded it a ton so that it would ship well, but it looks horrible. I hung it up so that gravity might help. No luck so far. It’s plastic so I will be delicate with the ironing. I’m not where I wanted to be at this point, but getting this in is a step in making sure my photos get taken. I’m getting really excited about the project but the deadline is approaching faster than I would like and planned. It’s going to be a lot of late nights for me after Christmas.

Currently waiting for elements of my set-up to arrive so that I can begin taking photographs, till then I have been creating my backgrounds. I have done a few already, but they are indoor scenes. I need a few outdoor scenes. Once again I began with a drawing.

I made it way too bright in preview, so that when I brought it into Illustrator. Then did a simple live trace on it, so that the lines would become vectors (much cleaner than my little sketch). Can you tell that I had fun drawing trees? ha. After Illustrator it again get brought into Photoshop for color. I’ve been coloring a lot for ads that my groups have created for our class, so I’ve gotten quite used to this. The end result is pretty cool, but I’m not sure if I’m 100% happy with it.  I will probably make a lot of changes in After Effects to unify my animation.

From the storyboard there is an obvious next step, especially to get the timing right. Which is an animatic. Below I have version one. It isn’t fantastic and the placement of text isn’t right, but it shows where my animation will be going. I am not completely happy with it, but I think it illustrated the timing and the way my animation will look in the end. I’m excited to continue this process. 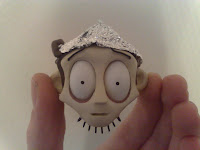 After creating my characters I knew that I was going to need to turn to creating a set for my characters to move through. I initially thought of none other than Wallace & Gromit. What worried me was that from my storyboard I would need to create at least four different sets. Plus Wallace & Gromit creates tons of real furniture and fixtures. Luckily after discussing the situation with tutors I learned that I am able to create elements in After Effects and use a green screen or masking to remove the background. I am still going to have to create elements that the characters interact with, but it is less than what the people of Wallace & Gromit do. It is still inspiring to see what they are able to create. Of course they have more time than I do.

Similar to Wallace & Gromit, Tim Burton’s Corpse Bride also created entire tiny sets. Seeing this helped me decide on colors that I want to use and the lighting that would create that. I like that everything is tinted a green-gray, which creates an eerie feeling. I think I will try to recreate something similar, because it seems really effective in enhancing the feel of the story.

His live action films also have a gray filter over them that creates the sad and dark feeling that is necessary in a film where a barber kills people and a baker bakes the bodies into meat pies. The wallpaper in this scene also really made me want to create seemingly happy wallpaper for a dark and dingy scene. I also loved all of the wood elements in all 3 scenes that create a subtle warmth that rounds out the set.

My original plan is also to create an almost tea party or coffee shop scene to round out the end of the animation. I then of course turn to the quintessential tea party, of Alice in Wonderland. Tim Burton’s version was not my favorite, because I wanted him to make everything have a darker twist to it. He made it too child friendly in my opinion, but at the same time it was a beautiful film visually, filled with characters and scenes that completely inspired me. I liked the use of the pastel colors in this dark  and gray atmosphere. I think I will try and do something similar.

To create the secondary characters I began the same way as I did with the main character, which was a wire frame skeleton. I was excited to have them go so much quicker, because I had already done it once. It is strange creating characters that are supposed to represent you and your parents. It was very enjoyable though. I’ve learned be very careful with the black fimo, because the color transfers to your hands and an other colors. Big mistake to make a black skirt then try to fix the faces. Below are some progress shots of my process.

Currently trying to perfect the backgrounds for my Animation.

I started with a sketch for my wallpaper. When I began with the sketch I was planning on simply drawing several flowers to create this wallpaper. But I got to a point and realized that I could simply make edits on the computer, so I brought my image into Adobe Illustrator.

I live traced it and added color. Although my animation is going to be really dark and muted. I wanted to start with a bright image that I can bring down in After Effects with the rest of the animation.

Then it came to creating the scene. It had a lot to do with rotating and simply playing with it. I’m still not sure if I am completely happy with it, but it’s a step in the right direction.

Then I of course don’t simply have one indoor background in my animation, but instead two, so I needed to create a second. This time I went for a more subdued background. Once again I will change the way it looks in After Effects, but it’s definitely a start.

I’ve only done a claymation once before and that was of a dinosaur crushing a car. It is pretty terrible, so I won’t post it on here. It taught me that claymation is extremely difficult… So I started early with creating my characters. I of course wanted to start with my main character. Starting with a wire form, made of christmas ornament wire, of course. It proved more difficult than I thought to find cheap wire. The wire skeleton idea came out from inspiration of “The Animation Bible: A Practical Guide to the Art of Animating, from Flipbooks to Flash” by Maureen Furniss. In the book it suggests that the figures should be made of a twisted wire frame. I didn’t do that because it seemed to make the figure too rigid. The suggested some sort of beads, or cheaper clay to build the frame.  I decided to use aluminum foil, because the only clay I had is pretty expensive and I am on a student budget. I created basically a skull out of foil as well and then came the clay. It was a lot of trial and error but I think the end result was pretty successful. Below are some progress shots.

With the start of every project comes the initial storyboard. This is what I came up with. It is lacking in lighting and more detail, but it is showing the direction I am going in. This film will be an interesting experiment for me. I’m not sure how it will go. I have never worked in clay… I am going to do my best.

I am currently in a Motion Graphics class and for the final project I need to create an animation. Every project has to start somewhere and for me it was a mood board. I am always inspire by Tim Burton so that’s the direction I decided to go on, but there are of course many other sources of inspiration. Including a song by Daughter.